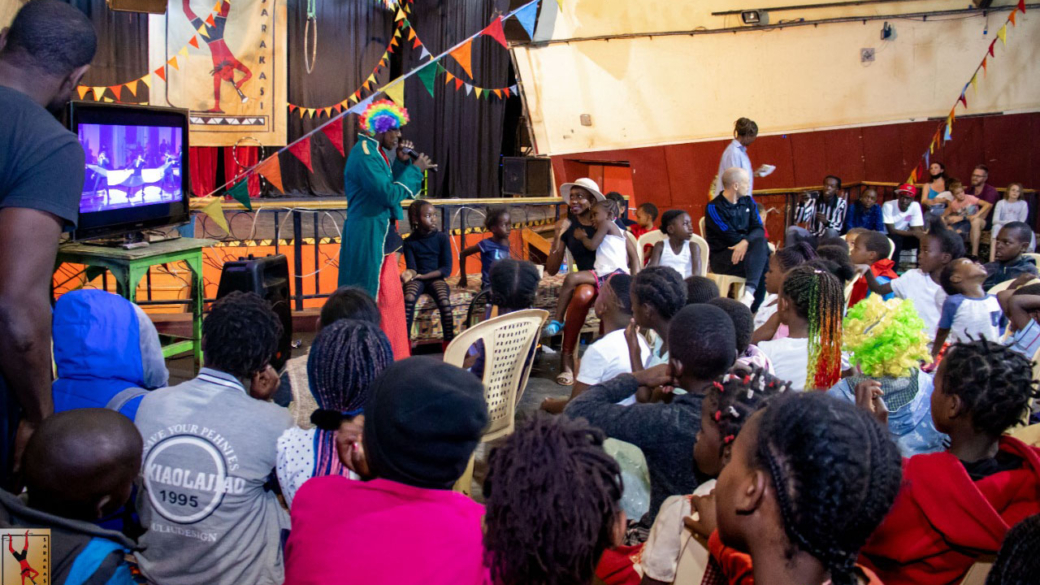 It was a beautiful Saturday morning, the Sarakasi Dome was tastefully decorated with balloons and colorful flags from the foyer to the Main Hall and the kids excitedly noticed the change in atmosphere. The kids program that takes place every Saturday morning went on as usual from 9 am to 12 pm. These three hours were the longest as the kids could not wait for the long-awaited World Circus Day Show to begin, but before the start of the show, the kids were served different assortments of their favorite snacks during which the Sarakasi Kids Program team had a meet and greet with the parents to have a look at the progress made by their young stars.

At 1pm Sarakasi Dome opened its doors to the public so that the celebration would commence. Many cheerful and joyous children, adults, artists, friends and family and even a dog came through pouring right into the Sarakasi doors. The MCs led by our acrobats lead coach, Mr. Washika and “Mama Slippers” engaged the audience throughout the show. They introduced the opening act as a duo performance by our very own Mike and Fiestas who performed contemporary dance. Sarakasi kids were also in attendance with a hip-hop dance act and boy oh boy do these kids know how to put on a show.

The third spectacle on stage was an Acrobat performance by Sarakasi’s very own Rama, Majaliwa, Baraka, Sifa and Amadi. The smoke machine-filled stage and the upbeat music leading up to the performance grabbed the audiences’ attention as all eyes were glued to the stage waiting to see what would happen next. There were many different acts but the human pyramid and headstand done by Rama and Majaliwa took the audience by surprise and left them on the edge of their seats.

Then this was followed by a Clown and comedy performance by Mr. Washika, Peter, assisted by Zeke, a kid from the kids’ program. The duo was so spectacular as the kids’ laughter and the dogs light bark filled the dome. One thing for sure is that our ribs were going to ache till evening!! The aerial performance by Evelyn left us all picking our jaws from the floor as her prowess in this act is unmatched. This performance elevated the act of the circus.

The Black Blue Brothers (BBB brothers) had their meet and greet session first where they narrated their career journey from performing at Sarakasi Dome to traveling all around the world and even getting the chance to perform before Pope Francis, Queen Elizabeth, and the royal family. They explained how this opportunity was the highlight of their career. The group of five went ahead to showcase their amazing talents from the human pyramid spectacles to skipping rope stunts in push-up positions and upside down.

This World Circus Kids Show was definitely one for the books as everything turned out amazing. All the spectacular performances by the artists and the audience’s mood made it a magical experience. The audience stuck around the Dome even after the show was over wanting more.

Thank you to everyone who made this year’s World Circus Day a magical experience.